Bizarre but at least behind us 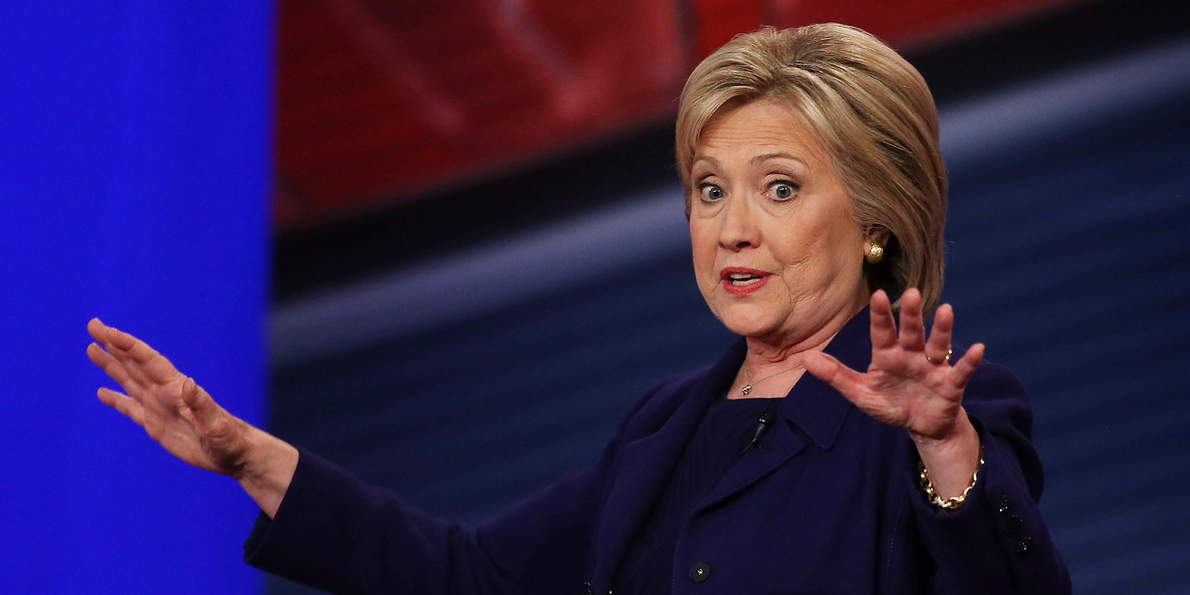 I can sleep well tonight knowing that Hillary Rodham Clinton blasted dt out of the water in tonight's spectacle.  (It does not deserve to be called a debate.)

"This was a shut-out tonight," said Chris Matthews of MSNBC. "It was a disaster.  He looked out of it.  He couldn't control himself."  http://www.msnbc.com/hardball/watch/matthews-first-debate-embarrassing-for-trump-773680707560

Most of my observations are from his many interruptions of her two-minute segments because I muted the television during his debate time.


1)  When Hillary pointed out that "He rooted for the [2008] housing crisis to happen" because he would make money, Trump interrupted her by yelling: "That's called business, by the way!"  He's proud of wanting the economy to fail so he could rake in the dough?

3)  Hillary: "I have a feeling I'm going to be blamed for everything that's ever happened--"
Trump interrupting her time: "Why not?"
Hillary, laughing, incredulous: "Yeah, why not?!"

4) Trump claim: "I have a winning temperament.  I have a much better temperament than she does." (laughter from the audience, which had been sworn to silence).

5) Trump claim: "She doesn't have a presidential look.  She doesn't have the stamina."
Hillary: "When he has visited 112 countries and made a peace deal and negotiated a ceasefire and negotiated the release of prisoners and spent 11 hours testifying before a senate committee, he can talk to me about stamina!" (big audience laughter).

6) When Hillary accused him of not releasing his tax returns because he may have avoided paying any taxes, he interrupted her to say "That makes me smart!"
http://blogs.wsj.com/washwire/2016/09/26/donald-trump-on-not-paying-taxes-that-makes-me-smart/

7)  Somehow he brought up his own name-calling against Rosie O'Donnell and said "Everyone agrees that she deserves it."  Lawrence O'Donnell said no human being deserves the kind of language he used against her.

David Axelrod on the evening: "She drove the conversation for much of this debate.  He was on the defensive.  She would say something--like dangling a piece of meat in front of him--and he would go for it every single time."

"I was just astounded at how unprepared he was... at how thin-skinned he was," said Michael Beschloss, NBC News presidential historian.

2) Re his refusal to reveal tax returns: "Is it that he's not as rich as he claims?  Or not as charitable?  Or that he owes $650 million to Wall Street and foreign banks?  Or maybe he has paid zero taxes for troops, vets, schools, health care... There must be something really important or terrible that he's trying to hide."

3) Re his charge that she spent all her time preparing for this debate: "I did prepare, and I prepared to be president, and I think that's a good thing."  (applause by audience)

4) RE Trump's history of racism: "He started his whole public career on this birther thing.  He persisted year after year.  In 1973 he was sued for racial discrimination in his housing projects by the Justice Department.  He was sued twice by the Justice Department... His bitter lie about President Obama's birth place was a very hurtful one.  But President Obama is a man of great dignity.  As Michelle Obama said, 'When they go low, we go high.'"

6)  "He hasn't told us how he would fight ISIS because he says it's a secret plan, but the only secret is that he has no plan."

Then there was the inevitable comparison on the drinking of water.  Commentators had to mention that she didn't take a drink of water the whole evening, but he kept sniffling and drinking water and grunting...  As I said, this was not a true debate but a competition for image and impression.

Posted by A Linstatter at 11:57 PM No comments:

Don't call it a debate! 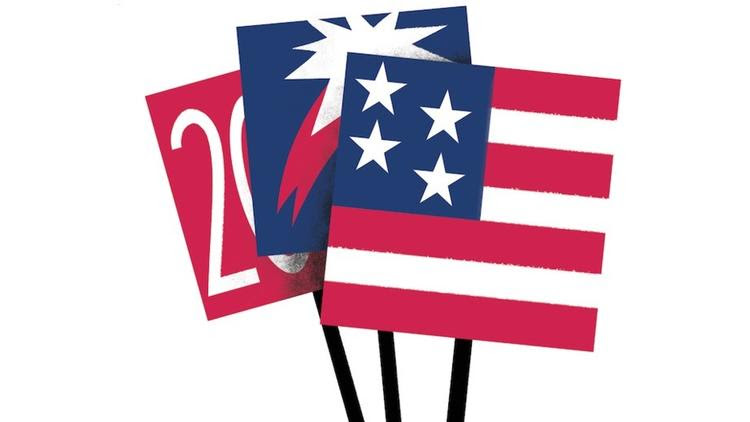 I refuse to call it a debate.

I refuse to watch it.

But probably I have to watch it.

Maybe I can mute the tv every time dt opens his mouth.

I can't stand to listen to a single word he says.

A tv showman vs. a US senator and former secretary of state is not a debate.  It's a spectacle.

The possibility of ideas being exchanged is remote.  The whole event will be ludicrous.

To take the event seriously--as the debate moderators and newscasters are required to do--is to give the showman too much credit.  He gains many points by just standing on the stage next to a serious presidential candidate.

I am angry that the Republican Party has chosen him as its candidate.

I am angry that he could actually become our next president.

I am angry that anyone at all will vote for him.

I am angry that he lies 70% of the time and that his followers still see him as "honest and straightforward."  That rating is from PolitiFact, a Tampa Bay Times website that earned a Pulitzer for its 2008 election coverage.

I could watch Hillary Rodham Clinton debate Jeb Bush or even Ted Cruz.

I refuse to grant legitimacy to an event of her attempting to engage this liar and pretend that there is a playing ground with rules, much less a level playing ground.

As Michael Finnegan reports in the LA Times analysis, "the scope of Trump's falsehoods is unprecedented, and he is dogged in refusing to stop saying things once they are proved untrue."

"He's a salesman.  He's a con man," says Thomas E. Mann, quoted in the article, a scholar at UC Berkeley's Institute of Governmental Studies.  "He's hustled people out of money that they're owed.  He's lived off tax shelters.  He's always looking for a scheme and a con, and in that sphere, you just fall into telling lies as a matter of course."

Marty Kaplan, a professor at USC's Annenberg School for Communication and Journalism, says he is either a con man or someone just "completely unconstrained by logic, rules, tradition, truth, law."

Thus he is unlikely to participate in a legitimate debate with rules and logic.  He will just try to steal the show and create a sensation.

Such an event is not winnable by either him or his rational opponent.  Only an applause meter can judge it, and sensation will cause the applause to increase.

Kaplan adds, "I'm confused whether the whole fact-free zone that he's in is a strategic calculation or a kind of psychosis."

The kindest conclusion is that he's mentally off-balance, probably by early dementia, a theory that was floated on the Diane Rehm Show broadcast on NPR last July.

I guess I will have to watch half the debate--the half spoken by Hillary Rodham Clinton.

Posted by A Linstatter at 5:29 PM No comments: 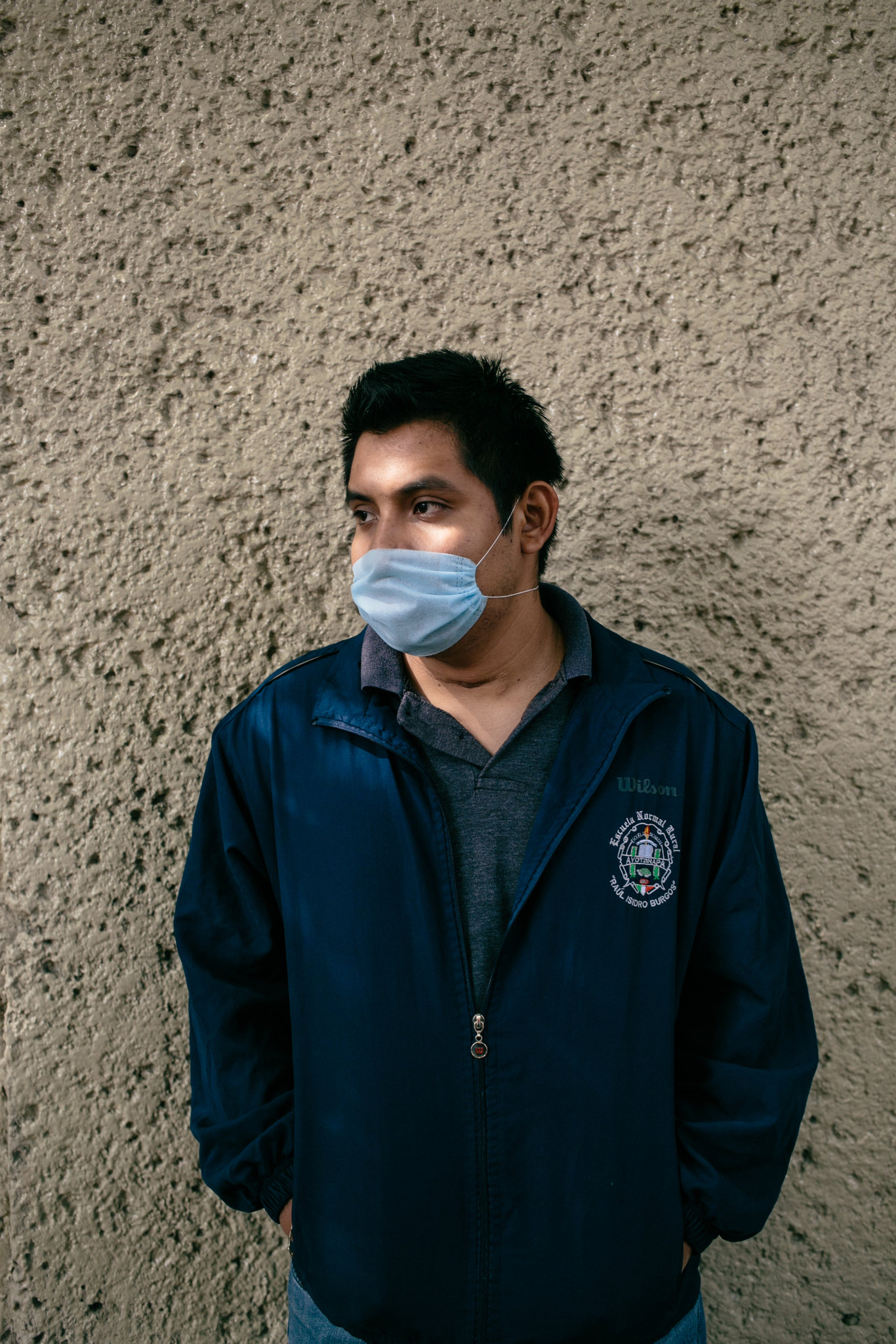 In the US we spent today focused on our presidential race and the performance we called a debate.

In Mexico, September 26, 2016, marks the two-year anniversary of the disappearance of 43 students in Guererro state on their way to a demonstration in Mexico City.

If only the US could pay enough attention to its neighbor to speak about these two years and the need for human rights in Mexico.

The 11 Survivors of Atenco: Seeking Justice


Eleven women in Mexico are demanding justice for the brutal mass rape by police of more than 40 women in 2006 in San Salvador Atenco near Mexico City.

Most of the women had been students, merchants, and activists demonstrating in the town square.

See the powerful photos of the eleven survivors today who are pursuing justice:

Afterward the police officers remained free but the women were imprisoned on charges of blocking traffic, some held for a year or more.

These women took their case to the Inter-American Commission on Human Rights, which has found that the police tortured them sexually and has called for further investigation.

President Enrique Pena Nieto was then president of Mexico State and ordered the "crackdown" on demonstrations that resulted in the abuse.

In April he visited Atenco and made a speech about Children's Day--but never referred to the death, the protests, or the rapes.

May he rot in Hell.

Thank you to the New York Times, reporter Azam Ahmed, and photographer Daniel Berehulak for this important and moving front page story followed by a two-page picture spread.

Posted by A Linstatter at 1:29 PM No comments: 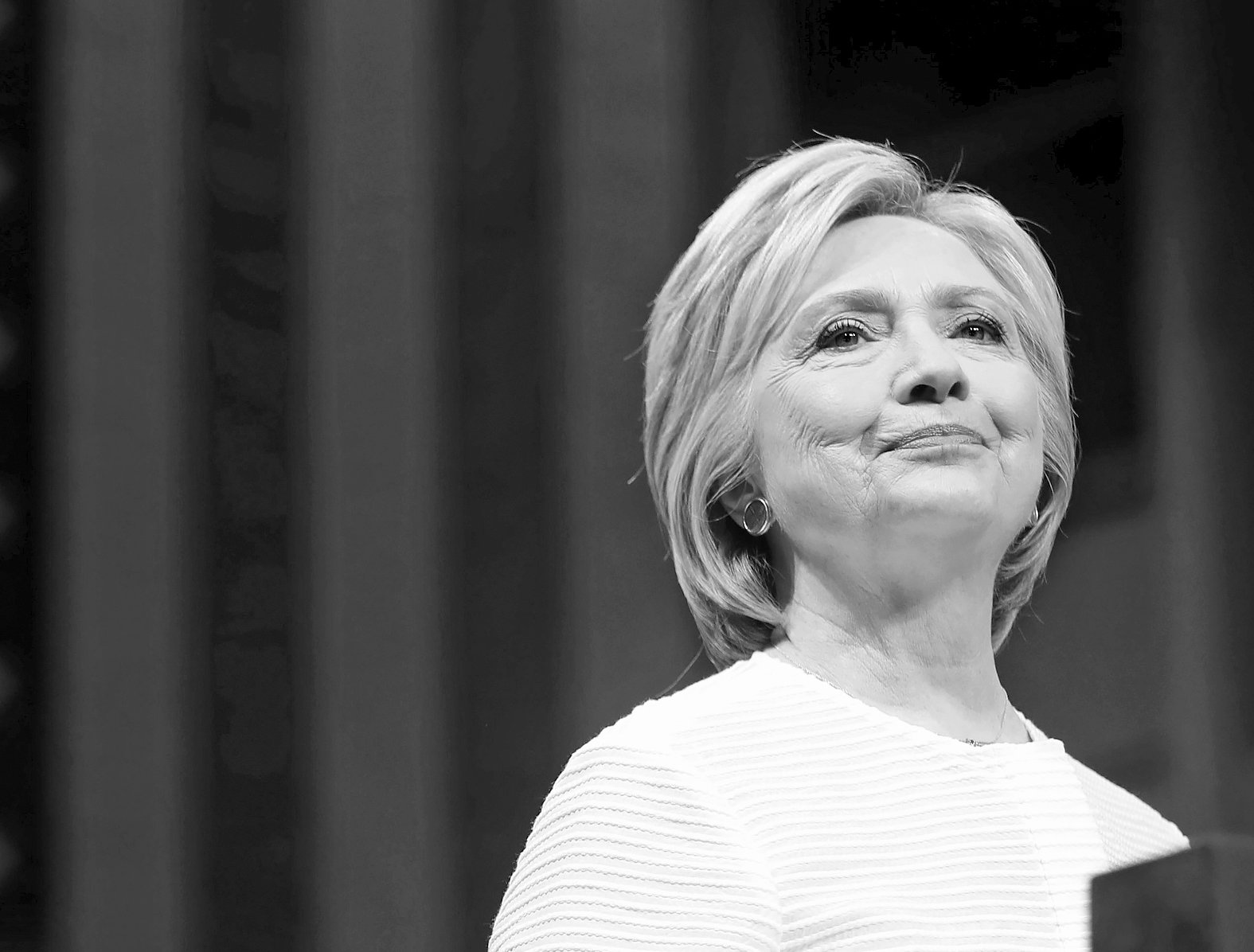 It's not a surprise that the New York Times is endorsing Hillary Rodham Clinton for president today, but the reasons are worth reading.

Reason itself is the key word here.  Reason vs. bluster.

We have a choice: an experienced, sane candidate or a candidate whose comments and demeanor show that he is falling into dementia.

Compassion for this impaired candidate is important here, but voters also need to feel a sense responsibility for our nation.  It's Hillary or innumerable disasters for all of us.

Note: I've not posted for most of August and September.  Instead of following the election news, I've been traveling and living in a remote corner of Colorado at 10,000 ft,--and holding my breath until the election hoopla is over.
Posted by A Linstatter at 12:37 PM No comments:

What memorable words from President Obama:

He was speaking at the opening of the National Museum of African-American History and Culture.

My hope is that black folks watching the same images [of racial violence] on television, and then seeing the history represented at this museum, can say to themselves, the struggles we’re going through today are connected to the past, and yet, all that progress we’ve made tells me that I cannot and will not sink into despair, because if we join hands, and we do things right, if we maintain our dignity, and we continue to appeal to the better angels of this nation, progress will be made.

I thought of these words in November, December, and January, after the electoral college chose dt as our 45th president.

I cannot and will not sink into despair.
Posted by Anne Linstatter at 12:14 AM No comments:

Trump gets subtle in his sexism 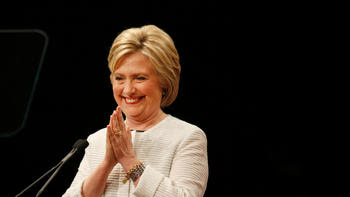 Thank you to Cathleen Decker of the LA Times for her analysis of the undercurrent of sexism in the t campaign against Hillary Rodham Clinton.


And those are just the undercurrents, when dt is on his best behavior.  Decker doesn't even get into his many outright anti-female comments.

Here's President Obama's assessment of the campaign, as quoted in the article:

“...there's a reason why we haven't had a woman president; that we as a society still grapple with what it means to see powerful women,” Obama said. “And it still troubles us in a lot of ways, unfairly, and that expresses itself in all sorts of ways.”

Posted by A Linstatter at 12:24 AM No comments:

3% own almost half of all guns

Thank you to Harvard and Northeastern Universities for their study of gun policy and behavior, reported on in The Guardian by Lois Beckett.

Among their amazing statistical findings:

3% of Americans own almost half of all guns.

7.7 million people own an average of 17 guns each.

Thanks also to NPR for their interview of Beckett.