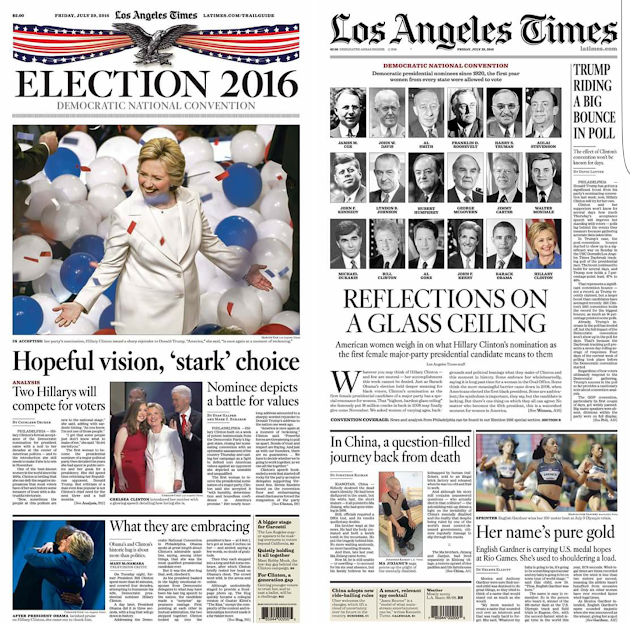 Hillary Rodham Clinton now has the nomination of the Democratic Party for president of the US in the 2016 election.

It's been a long couple of years--or decades--leading to this day.

May she hold up during August, September, and October and win the election on November 8, 2016.
Posted by A Linstatter at 5:15 PM No comments:

I loved the prayer by Rabbi Julie Schonfeld at the opening night of the Democratic Convention.

Her prayer brought me to tears.

May we all remember this true definition of greatness and not be fooled into seeking bombastic greatness or military greatness.

Many thanks to this beautiful rabbi from White Plains, New York, for leading us all to remember the only One who is truly great--our Creator--and to follow Scripture as we measure greatness in our political candidates.

Note about her:  Julie Schonfeld is the first female rabbi to serve in the chief executive position of an American rabbinical association, having been named the executive vice president of the Conservative movement's Rabbinical Assembly in 2008.

Another note: Bernie Sanders supporters booed the opening prayer by the Reverend Cynthia Hale when she mention Clinton's name in her prayer.  See the commentary by David Gibson of the Religious News Service:

Then again, Schonfeld, a leader in the Conservative Jewish movement, never mentioned Clinton. And she delivered what was the most biblically profound meditation of the day-old convention — with perhaps a sidelong dig at Trump, who party leaders hope will emerge as the one true opponent by week’s end:
“In a season so filled with chatter of ‘Who is Great’ and ‘What is Great’ and ‘What Shall Be Great,’
Let us remember Scripture’s clear, simple explanation of greatness:
God is the great, the mighty and the awesome,
For God defends the cause of the widow and the orphan,
And loves the stranger residing among you.
This is God’s greatness and this is the greatness the American people must strive to imitate.”

Posted by A Linstatter at 11:12 PM No comments:

Deporting children who are rape victims

Young girls are raped by gang members and forced to work for them--but when they flee with their family to the US, they are deported back to their home countries.

This is the policy of our government, approved by President Obama, who in general tries to improve immigration policy.

But refugees like Elena from Honduras are deported even though their lives and safety are in danger.

We bear some of the guilt for these policies.

We must change things for Elena.
Posted by A Linstatter at 11:10 PM No comments:

Yay for WOC and Women Priests!

Congratulations to the Women's Ordination Conference as they celebrate 40 years of working for women priests ordained regularly in the Roman Catholic Church!

Currently there are 40 or so women priests ordained outside the rules (irregularly).

They are pleased that Pope Francis has made a few

The video includes a reprise of "Sister, Carry On" made popular by Carolyn McDade. 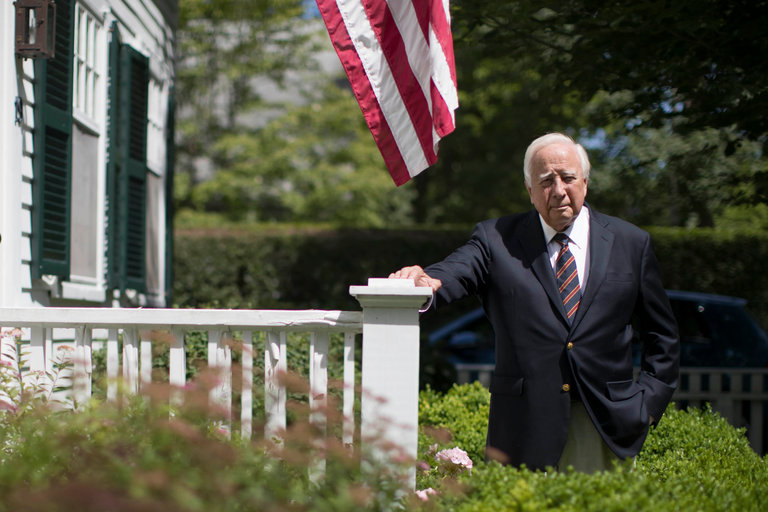 Good to hear that Ken Burns and historians of the American presidency are teaming up to inform voters about who Donald Trump really is.

Thank you, Sharon, for letting me know about this article in the New York Times.

My friend Jan Leonard introduced me to the term "low-information voters..." a nice way of referring to people who vote as if the presidency were a high-school popularity contest.

Burns and McCullough are trying to give these people a little more information.
Posted by A Linstatter at 1:09 PM No comments:

A Small World After All

Not sure who produced this great little commentary, but thanks to my friend Sharon for sending it to me:

Posted by A Linstatter at 11:56 AM No comments: 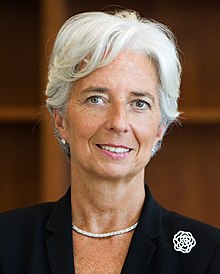 I had to look up Christine--I need to know more about her:

She's been the Managing Director of the International Monetary Fund (IMF) since July, 2011.

Here's an acronym to remember their names:  HJ - TAC.

Now that women have significant power in the political and economic world, I need to be a good citizen and know their names and roles.
Posted by A Linstatter at 9:55 AM No comments:

Did God call him home??

Did God call him home?

Every time any one dies--whether by cancer or by mass murder--we blame it on God.

In President Obama's speech in Dallas on July 12, he made a personal comment on each of the five police officers who died.  In regard to Michael Smith, he said:

Michael Smith answered that call. In the Army, and over almost 30 years working for the Dallas Police Association, which gave him the appropriately named Cop’s Cop Award. A man of deep faith; when he was off duty, he could be found at church or playing softball with his two girls.
Today, his girls have lost their dad, for God has called Michael home.

Did God look down on Dallas before the shooting and select five people to "call home"?

Did God look with grief on the shooter and his actions and those hit by bullets?

After they were dead or dying, did God call them into God's fuller presence, embrace them, and welcome them?

But to say simply that "God called them home" takes the killer off the hook.  It places the decision to end their lives in the hands of God.

I refuse to believe in a God who "takes people home" when they are in the fullness of life--who wants their earthly lives to end.

God allows a lot of crime and illness to occur, but we abuse God's name and honor when we blame God for these events.

Posted by A Linstatter at 9:44 AM No comments:

President Obama on "the will to make change"

What a wise and truth-speaking president we have now.

Enjoy him while we can.  It has been a great eight years in many ways.

"It will be a while before we have another president come along who will talk like this," comments John Arthur, sending this excerpt from the transcript of President Obama's speech on Tuesday in Dallas:

"As a society, we choose to under-invest in decent schools. We allow poverty to fester so that entire neighborhoods offer no prospect for gainful employment. We refuse to fund drug treatment and mental health programs."We flood communities with so many guns that it is easier for a teenager to buy a Glock than get his hands on a computer or even a book."And then we tell the police, 'You’re a social worker; you’re the parent; you’re the teacher; you’re the drug counselor.'"We tell them to keep those neighborhoods in check at all costs and do so without causing any political blowback or inconvenience; don’t make a mistake that might disturb our own peace of mind. And then we feign surprise when periodically the tensions boil over."We know those things to be true. They’ve been true for a long time. We know it. Police, you know it. Protesters, you know it. You know how dangerous some of the communities where these police officers serve are. And you pretend as if there’s no context. These things we know to be true. And if we cannot even talk about these things, if we cannot talk honestly and openly, not just in the comfort of our own circles, but with those who look different than us or bring a different perspective, then we will never break this dangerous cycle."In the end, it’s not about finding policies that work. It’s about forging consensus and fighting cynicism and finding the will to make change."

Full text:
http://time.com/4403543/president-obama-dallas-shooting-memorial-service-speech-transcript/
Posted by A Linstatter at 9:32 AM No comments:


"Scripture tells us that in our sufferings, there is glory," President Obama began his speech at the memorial service for the five slain police officers in Dallas, Texas.

He was somber and wet-eyed as he yet again spoke to survivors of a mass killing, surely the worst of his duties as president.

To watch and hear him speak was deeply moving.

Here are reports from the Religion News Service, the New York Times, and the Washington Post.

In a year the five most powerful people in the world could be: Hillary ClintonJanet YellenTheresa MayAngela Merkel Christine Lagarde

Thank you to John Arthur for this tweet!
Posted by A Linstatter at 9:59 AM No comments: 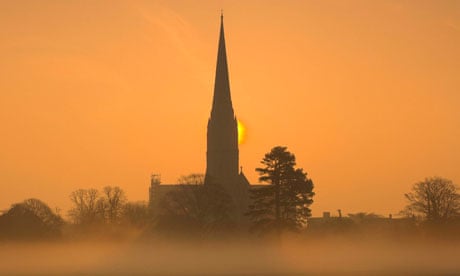 Thank you to my friend Judith Steinmetz for pointing out this article in The Guardian, "Cathedrals in Literature" by John Mullan in 2011.

The photo with the article was taken by Peter Lewis (Loop Images, Corbis).  It shows Salisbury Cathedral, the focus of The Spire by William Golding.

Mullan lists his favorite novels set in cathedrals with a commentary on each one, starting with The Spire and followed by The Mystery of Edwin Drood, the last book written by Charles Dickens.

"Murderous passions are nursed in the shadow of the great cathedral," comments Mullan.

Each book is set in a cathedral, which becomes a central character in many of the novels.

Joanna Trollope, a descendant of Anthony, is the only woman author on the list with a book called The Choir.

Judith manages the hospitality ministry of Grace Cathedral in San Francisco, so she knows the life of a great cathedral intimately, including the politics and personalities that form these novels.  On Sundays she makes sure that her team of volunteers provide the coffee, tea, cakes, and cookies after worship, and for events on other days of the week as well.

What a challenging volunteer ministry!  And what a champion reader!  Judith's favorite books read recently are all of Anthony Trollope's novels in the series known as the Barchester Chronicles.

The list includes a set of poems by Rainer Maria Rilke, inspired by a visit to Chartres. Not surprisingly, Rilke felt oppressed by the lofty stone structure, a metaphor for religious oppression.

Mullan quotes one line:  "And in the towers' quelled ascent, / and sudden spurn of skies, sat Death".
Posted by A Linstatter at 9:50 AM No comments:

Thanks to John Arthur for pointing out this article in Fortune Magazine about the problems Colorado is having with marijuana:

Colorado is having second thoughts about its rush to legalize marijuana. Marijuana-related hospitalizations have tripled since legalization, and ER visits are up 30%. Moreover, two of Colorado's neighbors - Nebraska and Kansas - are suing the state, claiming it is contributing to illegal drug trade in their states.

Voters in Pueblo, Colorado, are rethinking access to marijuana in their city.

For the full article by Jennifer Alsever, see:

Posted by A Linstatter at 11:25 AM No comments: