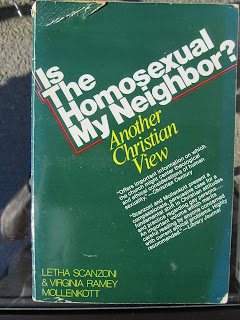 About 25 years ago someone showed me a pamphlet entitled "What the Bible Says about Homosexuality."

I opened it, and the inside was blank--a powerful statement.

Most of what we think the Bible says about "homosexuality" is wrong.

In the Genesis account of Sodom and Gomorrah, the actual sins involved are gang rape by heterosexual men  and inhospitality (to the extent of violence) toward guests.

In Romans and other New Testament letters, words that are translated as "homosexual" or "homosexuality" refer to situations that involve adultery or temple prostitution.

There is no statement about long-term, faithful commitment between two men or two women.

Jesus made no statement on homosexuality, though he spoke up against casual divorce, which was available to men in first-century Israel but not to women.

Nevertheless, opposition to all things same-sex has become associated with Christianity in public debate in the last thirty years.

In my course on Women and Religion, we follow current news in the areas of religion and women's issues, so lesbian and gay issues in the news come up.  Because we don't have time to address them fully in the classroom, I did a lecture on the subject, available on YouTube with this link:

This past week there has been renewed interest in the issue of gay rights because the Supreme Court heard arguments on whether to uphold the Defense of Marriage Act (DOMA) and California's Proposition 8.

There are many books on the subject--such as:

Is the Homosexual My Neighbor? Another Christian View by Letha Dawson Scanzoni and Virginia Ramey Mollenkott (Harper & Row, 1978)

The Church and the Homosexual by John McNeill (Sheed, Andrews, & McNeel, 1976)

What God Has Joined Together? A Christian Case for Gay Marriage by Letha Dawson Scanzoni and David G. Myers (HarperCollins, 2005).

For a quick introduction to the few passages in the Bible that may seem to make a statement on homosexuality, use the YouTube link above.

Posted by A Linstatter at 6:33 PM No comments:

Women in Egypt, Libya, Tunisia and other countries are finding increased problems under the fledgling new governments that replaced dictators two years ago in the revolutions called "the Arab spring."

In Egypt, some Islamist leaders are blaming women for being assaulted and raped in public areas.  Police protection has decreased.

In Tunisia ultraconservatives want to bring back veiling of women.

It's so easy for men to find excuses to deny women their simple human rights.  Each day is a new battle.
Posted by A Linstatter at 1:39 PM No comments:

First there was opposition to homosexuality--back in the 1970s.

The homosexual "lifestyle" was the problem, and the unspoken adjective on that noun was "promiscuous."

Then gays, lesbians, bisexuals, transgender people and others began to have public ceremonies for their unions.

"Same-sex union" entered the vocabulary, but churches were not supposed to sanction these unions.  After all, they involved homosexuals.

When the GLBT contingent began demanding full rights to marriage under state and federal law, their opponents said that extending these rights would somehow weaken or diminish straight marriages.

I don't see how that claim makes any sense, but we now have a federal law denying marriage to two persons of the same sex, the Defense of Marriage Act.   Apparently, marriage as an institution needs to be defended.

What do these opponents of gay marriage want?

Civil unions that are clearly set apart from economic benefits and social approval?

Posted by A Linstatter at 4:48 PM No comments:

Popes Have a Motto!

Apparently all popes have a motto.  Who knew?

Pope Francis has chosen the words miserando atque eligendo--"having mercy on him and choosing him."

These words came from a sermon by an 8th C. English monk named Bede, who was describing Matthew, the tax collector chosen by Jesus to be one of his disciples.
http://www.latimes.com/news/world/worldnow/la-fg-wn-pope-francis-chooses-his-accessories-20130318,0,3493754.story

Unlike most of the other disciples, who worked in fishing, Matthew was part of a hated group.

Most tax collectors were cheaters--their income was gained by adding a percent onto the tax. When Jesus went to Matthew's house for a dinner, he got criticism: "Why does your teacher eat with tax collectors and sinners?" (Matt. 9:11).

Bede sees Jesus choosing a tax collector as an act of mercy and forgiveness toward Matthew.

It's an act of humility for Pope Francis to identify with Matthew in being a less-than-perfect human chosen by God.

So far so good, Pope Francis!

Perhaps Jesus knew Matthew had some useful skills--he could read and write, unlike most of the other disciples.

Most critics of Jorge Mario Bergoglio as pope cite his involvement with Argentina's murderous dicators during the "Dirty War," 1976-83.  Like Matthew, his record may be less than perfect.

But then again, precisely through his experience in navigating through evil, the new Pope Francis may have some skills that Jesus finds useful.


Posted by A Linstatter at 6:41 PM No comments:

Sr. Joan Chittister, a Benedictine speaker and author, should have been among the 115 or so Christian leaders electing the pope this past week.

She should, in fact, have been considered papabile.

Her comments on the selection of Jorge Mario Bergoglio exactly reflect my reaction on March 13 when the choice was revealed.

She describes the weariness of Christians with the exclusion of women, married priests, gays, and others.  She notes our lack of hope that whomever was chosen would be any different.

Then she records the hope she felt when the new Pope Francis came out wearing a simple white cassock and asked the people to pray for him before he blessed them.

We don't yet know if that hope is misplaced, but for the moment, for one billion Catholics and another billion Christians of other stripes, there is hope.
Posted by A Linstatter at 11:01 PM No comments:

There is a God... and there's still a God in the Roman Catholic Church, as demonstrated by the election of Pope Francis, a humble archbishop from Argentina.

The blue and white flag with the central emblem now flies outside my house (I bought it on a trip to Argentina   to visit my daughter who was studying there a few years ago).

I am amazed and in tears.  I fully expected a new pope who was Italian and in most respects a carbon copy of Joseph Ratzinger.

As the hullaballoo builts up over the conclave, I said to myself, "The cardinals are probably as identical as figures cut out of a folded piece of paper and pulled out to form six figures.  It doesn't matter who the next pope is--they are all alike."

But I am wrong.  This man chose not to live in the archbishop's palace but instead to live in an apartment and commute to work.

He has chosen the name Francis--the saint of poverty.

Hope remains for the RCC.
Posted by A Linstatter at 12:58 PM No comments: 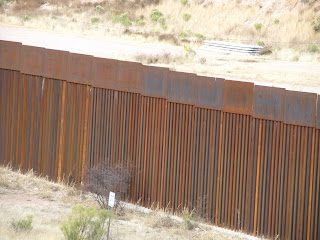 Learn about border issues in the area of Nogales, AZ, and Nogales, Sonora, by watching Border Wars on the National Geographic channel on Thursday, March 7, at 9 pm (Pacific Standard Time).  Afterward you can access the show through the Nat Geo website and through YouTube.

See also this LA Times review of the first year of this reality television series about border patrol officers, immigrants, and drug traffickers:

Posted by A Linstatter at 10:56 AM No comments:

More and more it looks as if the Pope's resignation is the falling of a house of cards.

The house of cardinals has been wracked by cover-ups of priestly sexual abuse of children, and now rumors of same-sex relationships within the Vatican are emerging.

The report from The Guardian on Feb. 22 explains that Pope Benedict XVI decided to resign on Dec. 17, 2012, the day he received a two-volume dossier on the Vatileaks, including mention of a gay faction.

The Pope may already have been aware of serious charges against Cardinal Keith O'Brien in Scotland, who was submitting his resignation some time in 2012.

In 2013 the agreement was made that O'Brien would resign in March on his birthday, but O'Brien's bold comments about the need to give up priestly celibacy led the Pope to cut him off late in February.

What a spectacle--the Vatican imploding, with no help from its enemies.

Posted by A Linstatter at 12:12 AM No comments:

Invading Iraq in 2003 was "the biggest diplomatic error" in our lifetimes, says an editorial in the Financial Times today.

"The invasion was arguably the biggest diplomatic error of the post-second world war period."

It cost lives, money, and trust.  It drew attention away from trying to track down perpetrators of the September 11 attack, who were hiding in Afghanistan or Pakistan.

It confirmed everything Al Qaeda had been saying about the US.

It was a proud, imperial act--and its impact on lives and on the US economy will last for decades.

Posted by A Linstatter at 8:08 PM No comments: