A friend sends me this wry commentary on the 2016 presidential election:

There are four living former presidents (two Democrats and two Republicans) as well as the sitting president.
None of them support DT.
That's called bipartisanship.
Perhaps America should pay attention to the people who actually know what the job entails.

Posted by A Linstatter at 3:57 PM No comments:

When No News is Bad News 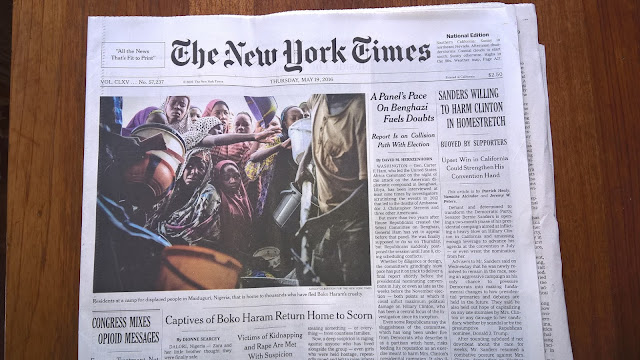 We need to be grateful that two newspapers in the US still have reporters and correspondents, perhaps stringers, in Nigeria and Ghana.

You will not find online news sites such as the Huffington Post with reporters there. Television broadcasters may get there eventually, but they will not give us the in-depth reports that newspapers provide.

For you and me to know about things in Africa, Asia, and South America, there has to be someone there to do the initial reporting.  Everything else is a rehash built on the newspaper reports.

The New York Times staff of reporters, editors, and correspondents has been cut back in recent years, and more reductions are predicted for this year. 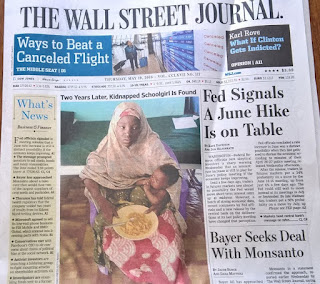 The Wall Street Journal, on the other hand, claims to still have "a global news staff of more than 2,000 journalists in 85 news bureaus across 51 countries."

It has been owned by Rupert Murdoch's News Corp since 2007, so we have him to thank for today's first-hand report on the return of Amina Ali Nkeki (see my previous post).

In contrast, The Los Angeles Times, decimated over the years since its 2000 purchase by Chicago's Tribune Media, has no front page photo or story today on the return of the first of the kidnapped Chibok schoolgirls.

Why?  It has no reporters there.  All this once-great newspaper could do is print an Associated Press story on page A4.  Its many foreign bureaus and correspondents have been cut to a skeleton. 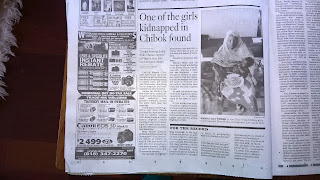 Online, the LAT offers a rehash of the AP story with the byline "Tribune News Services" and credit to the AP at the very end.  You have to do a search to find the story--it's nowhere on today's home page.

Or you can scroll to the very bottom of the home page (beneath sports, entertainment, columnists, and everything else) and click on World News, where it is the sixth story down, underneath "Popular This Hour."  Apparently this story not popular--perhaps because it is so hard to find online and in the print edition.

Posted by A Linstatter at 11:24 AM No comments:

One Chibok Schoolgirl Is Found

Blaming the victim is still okay in some parts of the world.

19-year-old Amina Ali Nkeki, kidnapped from her school in Chibok, Nigeria, in 2014 was found on Wednesday, starving in a forest with her baby and a man who claimed to be her husband.

She and other escaped victims of Boko Haram are met more often with scorn and suspicion than with comfort.  The group has used young women as suicide bombers, so there is fear.

Amina was taken to her mother, who identified her, but she is still being held for questioning by the Nigerian military.

Thank you to Drew Hinshaw in Accra, Ghana, and Gbenga Akingbule in Abuja, Nigeria, for this report.  The Wall Street Journal placed the photo on page one, top and center, and the story on page A7.

The New York Times placed its own photo on page one and well as a story beginning with Zara, another young woman escaped from Boko Haram in Nigeria, who faced threats and beating in a refugee camp in Maiduguri, Nigeria.  Her baby, the product of rape while in captivity, bears stigma.

Another woman whose village had been burned down by Boko Haram, Hazida Ali, said this of returning women refugees:

"All those women who lived with Boko Haram are also Boko Haram soldiers.  The military should not make the mistake of releasing them.  If they can't execute them, they should figure out what to do with them.  They should not be allowed to lived alongside those who suffered."

Thank you to Dionne Searcey of the NYT for the interviews with Zara, whose full name is not revealed, and with Ms. Ali in a report from Dalori, Nigeria.  Thank you to her and Chris Stein for a report on Amina Ali from Lagos, Nigeria.

A report in April:  http://www.nytimes.com/2016/04/15/world/africa/nigeria-boko-haram.html?version=meter+at+0&contentId=&mediaId=&referrer=http%3A%2F%2Fwww.nytimes.com%2F2016%2F05%2F19%2Fworld%2Fafrica%2Fboko-haram-victims-nigeria.html%3Fref%3Dworld%26_r%3D0&priority=true&action=click&contentCollection=Africa&module=RelatedCoverage&region=Marginalia&pgtype=article

Posted by A Linstatter at 11:19 AM No comments:

Misogyny in the Run for President

Thank you to Michael Barbaro and Megan Twohey of the New York Times for today's report documenting dt's mistreatment of women over the years.

It's a sad story, beginning with a misogynist and autocratic father, continuing with an all-male military academy for his high school years.

He earned the yearbook's title of "ladies man."  Things only went downhill from there as he acquired the Miss Universe pageant and treated the contestants as horses to be examined physically.

He was whining last Monday about how Hillary Clinton treated the women Bill had affairs with.

Of course, no male candidate for president ever gets hounded about how he treated the men his wife had affairs with.

There used to be one way to treat such men--shoot them.  But Donald complains that Hillary wasn't nice enough to the female counterparts of these men.  Men get to shoot; women have to be nice.

Thank God the Times has nailed him on his own treatment of women over the years.

It's going to be a long six months.

I'm grateful for an active press corps that can hoist dt on his own petard.

Posted by A Linstatter at 11:57 PM No comments:

Just As I Am

Support for gays and lesbians is growing in evangelical churches.

Thank you to Tom Gjelten for the two NPR reports today on Morning Edition and All Things Considered.

One example of a gay-welcoming evangelical church is Ridgewood Baptist Church in Louisville, Kentucky.  It's part of the Cooperative Baptist Fellowship, which broke with the Southern Baptist Convention as it swerved to the right 25 years ago.

Nick Wilson, church pianist at Ridgewood, was ordained as a pastor recently.  Son and grandson of Baptist pastors, with two great-grandfather pastors as well, he had trained at seminary years ago but didn't fit the mold.  He is a gay man.

I guess he never got the message of the hymn "Just As I Am."

Just as I am, without one plea,
But that thy blood was shed for me
And that thou bidst me come to thee--
O Lamb of God, I come, I come.

Choking off the TV

This morning I turned on the television as usual while I fixed breakfast and fed the dogs.

I heard dt whining about how Hillary Clinton treated the women Bill had affairs with... the same report has been repeated hourly on all news channels for the last 24 hours.

I decided that's it: I'm turning off my television until November 9.

I refuse to listen to endless reports quoting the insults and ignorance of this millionaire misogynist funding his own campaign to take over our country.

Of course, no male candidate for president ever gets hounded about how he treated the men his wife had affairs with.

There used to be one way to treat such men--shoot them.  But Donald complains that Hillary wasn't nice enough to these women.  Men get to shoot their rivals--women should be nice to them, according to this nut.

It's going to be a long six months, but I for one am not going to listen to it.

I will drive to the most remote spot of Colorado where there is no cell signal and I have no television.  The few newspapers that make it to Telluride come a day late, and I'm a 20-minute drive from town.

Wake me up when this ridiculous election is over.

And by the way, if this pitiful excuse for a male is elected by the ignorant public, I will be moving to Mexico or Canada or France.

Posted by A Linstatter at 12:18 AM No comments:

Warning to anyone who doesn't know me: I have a thing about "mother's day" as it is currently celebrated.

I resent giving women lots of attention one day a year and getting 364 days of virtual servitude in return.

Historically, this was never a day to celebrate your own mother with gifts and flowers.

It was established by Julia Ward Howe as Mothers' Peace Day, a day to stop killing all our sons and daughters, at the end of the Civil War.

That's the only way I can deal with it.

I hate getting greetings from every Tom, Dick and Suzy to have a nice mother's day.

If you want to honor me, make a donation to an organization working for peace.

In Memory of Ashlynne

Some things are too awful to think about.

Below is one of them.

Women are not safe anywhere... even among men of their own culture.

What brought this young man to this act?
Posted by A Linstatter at 4:35 PM No comments:

Waiting for a Woman President 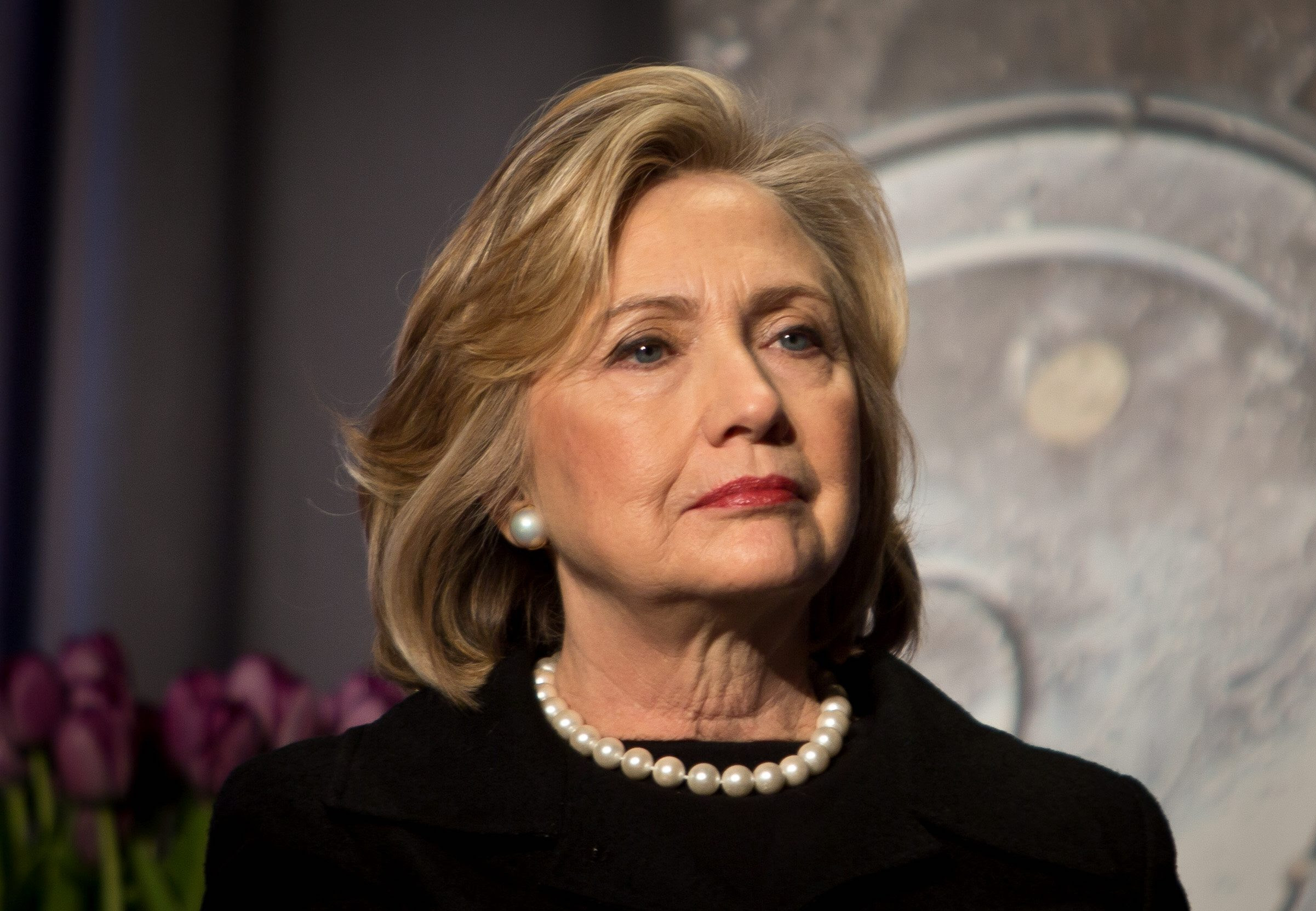 I was 21 years old and proud to cast my first presidential ballot for Shirley Chisholm in 1972.

Then in 1984 I was 36 years old and seven months pregnant, standing on a street corner waving a sign for Geraldine Ferraro and Walter Mondale on election day.

When John McCain chose Sarah Palin as his running mate in 2008, I was happy.  That meant that either my favored candidate, Barack Obama, would win or I'd get to watch a woman be vice president of the USA.

Now I am 67 years old and happy to see Hillary Clinton run for the Democratic party's nomination.

Posted by A Linstatter at 12:41 AM No comments: